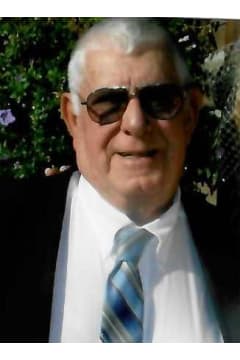 Pierce, William Victor (Bucky), 88, of Absecon, passed away on November 27, 2021. Bucky was born in 1933 and raised in Mays Landing, NJ until hie was drafted into the United States Army, serving from 1956-1962. He worked as a bus driver for New Jersey Transit and retired after a 30 year career.

Pop enjoyed working in the yard and taking care of the garden. He would often be called the ‘neighborhood landscaper. In his younger years, Bucky was an avid roller-skater and worked at the Mays Landing Lenape Park skating rink.

He was pre-deceased by his mother and father, Victoria and Clarence Pierce; his younger brother, Clarence Pierce (Carol); and his grandson, Corey Pierce. Bucky leaves behind his wife of 64 years and the love of his life, Irene A. Pierce; he is also survived by his 2 sons, Garry (Rhonda) and Douglas (Bridget); he will be incredibly missed by his granddaughters, Ashley Lang (Joe), Gracie Pierce, Katie Pierce; and his grandson, Jackson Pierce; along with his great-grandsons, Corbyn and Harrison Lang. Bucky had many family members who were also his friends, including his brothers-in-law, George Merlock and James Merlock (Lorraine); sister-in-law, Sally Ann Merlock; and special niece, Terry Michele Merlock. Bucky is also survived by many nieces and nephews, including Vickie Heintz and Michael Pierce.

Bucky was laid to rest at the Atlantic County Veterans Cemetery in Estel Manor on Thursday, December 2, 2021. For online condolences, please visit www.parselsfh.com.

Click a candle below to add a candle to your message.

Memorialize Your Family
With Our Online Obituary Parsels Funeral Home is here for you in your time of need. Learn More About Our Celebration of Life Services Parsels Funeral Home highlights our veterans on our Veterans’ Memorial Wall. This includes the names of those individuals who served the nation and are now entrusted to our care. If the veteran you are looking for is not here, please enter the deceased’s name and hit search. Learn About Our Veteran Memorial Services Share your sympathy for loved ones by ordering flowers with us. Parsels Funeral Home works alongside top florists in Atlantic County to ensure that the deceased receive beautiful flowers. Please click on the appropriate deceased from the obituary listings above to order flowers for your loved one. We Offer the Book of Memories™

Parsels Funeral Home offers what we consider to be the finest example of online memorials, the Book of Memories™. Created by an award-winning team of web developers and designers while being led by a funeral professional with over 25 years of experience, this online memorial is intended to provide your family with a permanent place to pay tribute to your loved one.

Far more than a traditional obituary—which is usually published only once and has no interactivity at all—the Book of Memories™ Memorial Website is a fully interactive archive of treasured photographs and stories remembered from their time spent with friends, family, neighbors, and co-workers.

You’ll be able to invite others to visit the online memorial, where they can upload images, share stories, write heart-felt messages of condolence, send a floral tribute to the funeral, or make a charitable donation in memory of your loved one. And the built-in social media integration means they can then “spread the word” about their addition to your loved one’s Book of Memories™ using Facebook and Twitter.

To learn more about our obituary and online memorial services, contact us at 609-641-0071 today.